Dover District Council acted dishonestly and unlawfully when they destroyed my home. And that is a fact which is confirmed by the outcome of their own investigation.

My property has been in continuous lawful residential use for 94 years!

And to put into perspective how long my personal dispute with DDC has endured, I was 34 years old when I purchased my home, and I’m now 72. Throughout that period of time Dover District Council officials have lied, manipulated the regulations, deceived successive planning committees and systematically done its best to wreck my life. They continue to do so to this day. And it’s all done to cover up the vindictive actions of the original administration, which was corrupt to the core.

I purchased my property through an estate agent in June 1984 and employed the services of a local solicitor who carried out all the necessary searches and enquiries.

At the time of purchase the bungalow had been in lawful residential use since 1928.

Yet, at a meeting less than 4 weeks later David Sturt, the Council’s Director of Planning, deceived the planning Committee by presenting incorrect and misleading information to support his recommendation that my home be demolished. 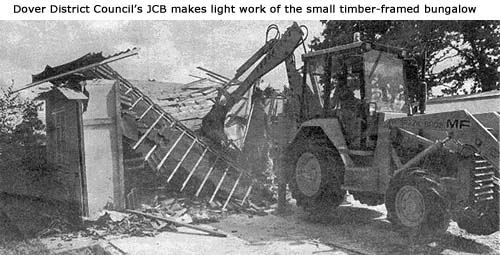 Dover District Council demolished my home even though it had been a lawful residence for over 60 years, and therefore had  permission for residential use

Evidence proves that the decision to demolish the bungalow was based on a combination of confusion, half-truths, manufactured evidence  and downright lies from Dover District Council officers.

Dishonesty, corruption and covert manipulation of the rules by Council officials has ruined many lives. None more so than in the case of the notorious killer Albert Dryden.

There are certain individuals controlling Dover District Council who don’t give a jot about the impact that their perverse decisions have on peoples lives. These disreputable ‘people’ are not concerned with the truth and continue to suppress the evidence that supports the long-standing residential use of my… more

Hopefully this web site will enlighten people as to the unsavoury tactics used by district council officials. It appears that council corruption may be widespread in this country and consequently the number of web sites exposing maladministration and injustice is increasing.